Overriding trend for 2019 was: Legislation Changes 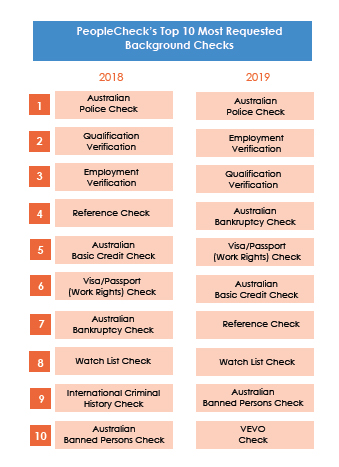 Legislation changes and regulator movement with new guidelines and standards came in thick and fast in 2019, catching up on the findings and fallout of the Royal Commission into the banking, superannuation and financial services industry.

Members of the financial services industry are working hard to change their culture, conduct, processes, with the focus moving towards the needs of the customer. These movements did have a flow-on effect on the background checking industry.

The regulators are changing too

The Australian Prudential Regulation Authority (APRA) that retains responsibility for prudential regulation, and the Australian Securities and Investment Commission (ASIC) which primarily regulates conduct and disclosure, will now be reviewed regularly. These regulators have already started making changes in line with recommendations from the royal commission and are the instigators of most policy changes; for example, we felt the impact of APRA tightening cloud-based services late in 2018.

In July 2019, APRA also released a new Prudential Standard CPS234 on Information Security to ensure that APRA-regulated entities have adequate security measures in place; requirements which are also extended to include information assets that are managed by third parties (including outsourced services such as HR and background checking).  It has never been more important for organisations to have robust information security policies and transparency around compliance with regulatory requirements.

In November 2018, Australia became a participating member of the Asia-Pacific Economic Cooperation (APEC) Cross Border Privacy Rules (CBPR) System which provides a single framework for the exchange of information and cross border privacy protections. The APEC CBPR System connects differing national laws on privacy and data protection within the APEC region. At present, there are eight participating countries: US, Mexico, Japan, Canada, Singapore, the Republic of Korea, Australia and Chinese Taipei, with more expected to join.

It was announced by the Australian Government’s Attorney-General Department following the confirmation of Australia’s participation, that they would work closely with Australia’s privacy regulator Office of the Australian Information Commissioner (OAIC) and businesses in 2019 to implement the CBPR system requirements; however, we are yet to see momentum on this. We will keep you posted on any developments.

The Australian Consumer Data Rights Bill 2019 [Treasury Laws Amendment (Consumer Data Right) Bill 2019] passed through Parliament on 1 August 2019, and will roll out in stages across specified sectors – the first being the banking sector, also known as “Open Banking” and this is already in motion. Open Banking came out of the Royal Commission into Misconduct in the Banking, Superannuation and Financial Services Industry that concluded in February 2019. Next on the hit list for the Consumer Data Rights is the energy and telecommunication sectors, and then it will be introduced sector by sector across the broader economy.

The Consumer Data Right aims to provide greater choice and control for Australian consumers over how their data is used and disclosed.

Whist this doesn’t impact on the background checking industry specifically; we have noticed an increase in candidate access to personal information requests, which we predicted would increase as candidates gain a deeper understanding into general data access rights. We have a dedicated Privacy Officer to assist candidates with these requests.

Modern slavery, human trafficking, forced labour, child labour, and slavery-like practices are not typically associated with the likes of developed countries such as Australia. However, modern slavery is important when considering global supply chains.  The International Labour Organisation has estimated that there are over 40 million people trapped in slave-like conditions.

Who must comply with the requirements in the Modern Slavery Act?

Factors for whether an organisation needs to comply/report vary, and organisations have approached these new requirements in different ways. We have noticed increased scrutiny in supply chain for background checking and HR/recruitment functions in general as compliance with this Act comes into play in internal policy and procedure.

The previous regulations prohibited employers from discriminating on the basis of any criminal record, unless the criminal record related to the ‘inherent requirements’ of a position.

The inquiry into aged care sector investigated aged-care housing, in-home care and care for young people with disabilities living in a residential aged-care environment is ongoing. An interim report was delivered in October 2019, with a final report expected in November of this year.

The Federal Government has vowed to spend more than half a billion dollars within the aged care sector as a result of the interim report. The Royal Commission described the findings as a “shocking tale of neglect” and identified three key areas for immediate action:

Although the above is a way forward, the report stated that the system clearly failed to meet the needs of elderly people, often neglecting them and described overall treatment as “unkind and uncaring”. ABC reported that the Commission found service shortfalls, serious substandard and unsafe and “underpaid, undervalued and insufficiently trained” staffing.

The most talked about case study for 2019 would have to be about Veronica Hilda Theriault. Employed as Chief Information Officer within the Department of Premier and Cabinet (DPC) which attracted a $270,000 per annum salary.

Charged with deception, dishonestly dealing with documents and abuse of public office in September 2017.

Sentenced to 25 months in jail with a non-parole period of 12 months. Judge Boylan said he took into account Theriault’s mental health struggles, including her bipolar disorder.

A CV that showcased a fabricated education and work history, with false referees listed.

Judge Boylan said “You arranged that your brother would supply a reference to the department in which he said he worked for you when you were employed at Wotif. That reference contained false information — neither you nor your brother had ever worked at Wotif.”

Theriault further organised for her brother, Alan Hugh Melville Corkill, to be awarded a Government contract that allowed him to earn $21,000. (Corkhill received a suspended sentence for his role in the fraud.)

Further conduct that was included in sentencing, but not the charges, included: Supplying a false payslip from previous employment to gain a higher salary; and providing a fake ‘fit to work’ letter, which Theriault wrote herself, not her treating doctor.

The information contained in this post is the opinion of PeopleCheck and does not form the basis of legal advice.

This website uses cookies to improve your experience while you navigate through the website. Out of these, the cookies that are categorized as necessary are stored on your browser as they are essential for the working of basic functionalities of the website. We also use third-party cookies that help us analyze and understand how you use this website. These cookies will be stored in your browser only with your consent. You also have the option to opt-out of these cookies. But opting out of some of these cookies may affect your browsing experience.
Necessary Always Enabled
Necessary cookies are absolutely essential for the website to function properly. This category only includes cookies that ensures basic functionalities and security features of the website. These cookies do not store any personal information.
Non-necessary
Any cookies that may not be particularly necessary for the website to function and is used specifically to collect user personal data via analytics, ads, other embedded contents are termed as non-necessary cookies. It is mandatory to procure user consent prior to running these cookies on your website.
SAVE & ACCEPT