Falsified Qualifications still a problem in 2021

A quick google search of ‘fake qualifications in Australia’ returns pages upon pages of websites purely created to offer fake diplomas, degrees and transcripts for purchase, providing authentic looking certificates using reputable Australian academic institutional logos. Even with an increased spotlight on this risk over the past decade with high profile case studies (particularly in the healthcare industry), stories of Australian employers being hit by fraudulent qualifications continue to roll in.

This is evident from the outcome statistics from qualification verifications undertaken by our team in 2020. Data in the below diagram shows that, 24% indicated a discrepancy between the information provided by the candidate and what our enquiries revealed during the verification process; and a further 8% had “Information to Note” e.g., contained possible adverse information, depending on the candidate’s role. This means that 32% of qualifications verified identified something an employer should probably be aware of. That is approximately one in every three candidates! 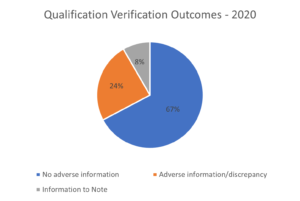 Some of the most common deceptions we find when it comes to qualifications are:

Recent Fake Qualifications in the Media

Falsified qualifications and resumes can slip through fingers incognito, even in sectors where compliance is a focus. Eventually discovering the fraud down the track can be a “too little, too late” scenario and the mistake can be fuel for the media, causing reputational damage and loss of trust from the Australian public.

Take this case study that unfortunately found its way into the media, circa 2017, as a prime example.

The incident prompted the government to scrutinise recruitment processes and undertake an investigation that uncovered two previous cases of alleged fraud from 2011. An individual was appointed Director but later resigned during allegations of dishonestly representing falsified work history and qualifications. The second case revealed that a former business engineering manager was fired during their probation period because falsified qualifications were provided. The “certified copies” were allegedly accepted at face value only.

Just as concerning, major government bodies are still falling victim to this type of fraud in 2021. In January, NSW Health discovered that two of their employees had falsified their qualifications to work as scientists in the pathology department for four years! It is alleged that one of the individuals was responsible for botching blood transfusions twice, using incompatible blood and causing adverse reactions in patients. The employees were caught out previously by British regulators, but this was not picked up during the Australian hiring process.

The risks like these associated with not undertaking thorough background checking within the healthcare industry are clear. Hiring unqualified individuals to treat patients can potentially lead to endangering the vulnerable that trust these professionals with their life.

The above is a surprising case study given it is so recent. We previously published an article ‘Combatting ID Fraud & Fake Qualifications in Healthcare’ where we discussed how NSW Health conducted an inquiry into a similar situation involving a Doctor working in hospitals for 10 years under the stolen identity of a UK Doctor. In 2019, the inquiry concluded that an improved recruitment process should be introduced within NSW Health, which included tightened requirements for the registration of international medical graduates. Although the 2021 discovery related to employees hired four years prior, perhaps this raises the question as to whether additional measures are needed, such as re-screening or screening audits when cases highlight gap areas.

PeopleCheck strongly recommends that all Australian and international qualifications are verified directly with the awarded institute for candidates across all roles that require a qualification. You cannot assume an individual holds the required qualifications just because it is listed on a piece of paper. Accepting resumes and academics at face value can expose your company to reputational damage, an unwelcome spotlight in the media, and potential loss of trust and revenue from consumers and stakeholders – as well as the obvious risk to the vulnerable in certain industries.

The information contained in this post is the opinion of PeopleCheck and does not form the basis of legal advice.

This website uses cookies to improve your experience while you navigate through the website. Out of these, the cookies that are categorized as necessary are stored on your browser as they are essential for the working of basic functionalities of the website. We also use third-party cookies that help us analyze and understand how you use this website. These cookies will be stored in your browser only with your consent. You also have the option to opt-out of these cookies. But opting out of some of these cookies may affect your browsing experience.
Necessary Always Enabled

Any cookies that may not be particularly necessary for the website to function and is used specifically to collect user personal data via analytics, ads, other embedded contents are termed as non-necessary cookies. It is mandatory to procure user consent prior to running these cookies on your website.